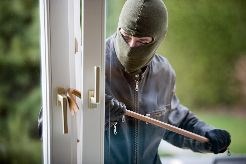 I am often asked about the legality of using a family protection dog  to defend yourself. There are elements to current UK legislation that protect homeowners when they defend themselves or others. The following statement by the justice minister strengthens a homeowners position when we defend our homes and our loved ones. It's not difficult to see how a family protection dog would deter a determined burglar.

Frightened householders who over-react when confronted by burglars will get more protection under Government plans, the new Justice Secretary will say today.

Chris Grayling plans to change the law to ensure even householders who use force in a way that may seem disproportionate in the cold light of day will be protected from prosecution.

It comes after Britain's most senior judge reinforced the notion that a person's home is their castle, saying furious householders have the right to get rid of burglars in their homes and are not expected to remain calm when confronted by intruders.

In his first Tory Party conference speech as Justice Secretary, Mr Grayling will also reinforce his tough-justice approach by saying all community sentences should have a punitive element. "Being confronted by an intruder in your own home is terrifying, and the public should be in no doubt that the law is on their side," he will say.

"That is why I am strengthening the current law.
"Householders who act instinctively and honestly in self defence are victims of crime and should be treated that way.
"We need to dispel doubts in this area once and for all, and I am very pleased to be today delivering on the pledge that we made in Opposition."

Force which is "grossly disproportionate" will still be against the law, but this is a higher bar than the current law which says force must always be proportionate. But primary legislation will be needed before the changes can come into force and no specific parliamentary time for this has yet been set.

The Lord Chief Justice, Lord Judge, said last month that burglary was an offence against the person, should always be treated seriously, and stressed that householders have the right to use force "to get rid of the burglar".

Family protection dogs from K9Protector all come with a comprehensive two day handover package. An element of that handover covers the legality of using a protection dog to defend yourself or another.