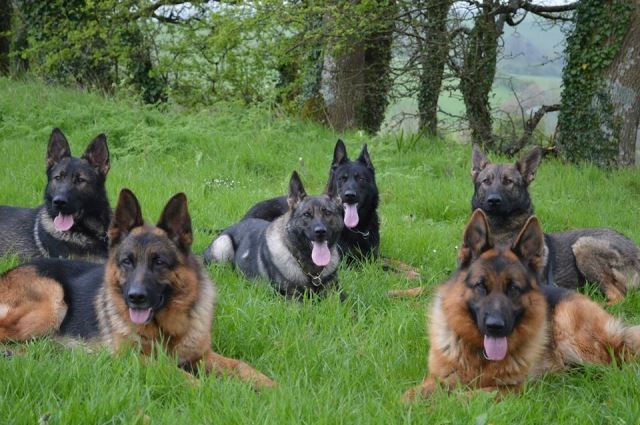 Protecting your home and your family is important to us and a question we get asked sometimes is ‘why use German Shepherd dogs as protection dogs?’. There are various reasons why, which we explain in this article.

When it comes to protection, there are other dogs that can be considered. There are various dogs that are classed as ‘guarding breeds’ such as the Dobermann, Rottweiler, Belgian Shepherd and Mastiffs - and while some of these breeds might be great at protective duties and perfect for other environments where protection is needed, we believe from experience that they are not the first choice for protection in a family or home environment.

At K9 Protector, we strongly believe that the German Shepherd dog is best for the home as family protection dogs, for the following reasons.

The German Shepherd is an intelligent breed of dog that absorbs expert training and will understand what it must do in certain real-life situations. Whether that’s having an intruder in the home or just fitting in with the domestic day with the family and kids.

When it comes to the question ‘Why use German Shepherd dogs as protection dogs?’, we believe that their level of intelligence and understanding is a key factor.

The GSD is also a loyal and noble breed that understands its duties and who it should protect. A German Shepherd from K9 Protector is fully trained to protect you, and not the intruder.

The German Shepherd is also a dog you want to have in your home. Its beautiful coat and looks make it desirable - although its great looks shouldn’t be misleading, the German Shepherd still ‘packs a punch’ with its presence. The size, strength and physique of a Shepherd Dog act as a deterrent to potential intruders who will think twice before breaking in.

A long-term part of the family

Our customers find that German Shepherds become a big part of their family. They typically live around 14 years so you can enjoy many years having a companion and protection for your home and family.

At K9 Protector, we breed and retain the best German Shepherds from proven working bloodlines. Selected for their health, temperament and intelligence, we train them to be the best protective dog possible for you. By combining our professional protection training and their natural strengths, there is no better solution for protecting your home than a German Shepherd dog from K9 Protector.

What’s the difference between German Shepherds and Alsatians?’

Where did the name Alsatian come from?

During World War 1, the British and Germans were using German Shepherd dogs in their ranks to attack, surprise and outmanoeuvre their opponents.

The German Shepherd being a large breed of working dog with high intelligence and a natural propensity for training was considered great value by the armed forces on both sides and was therefore widely used.

However, a lot of German words were renamed temporarily during the war due to anti-German feelings that were prevalent during this time. And so, the British preferred not to use the name “German Shepherd” as they wished to dis-associate themselves with Germany, at least symbolically in this case.

The Americans kept the original name German Shepherd, and this is still widely used. In 1977, after many campaigns by dog breeders, the name of the breed was changed back to German Shepherd Dog; known as GSD in the short form.

Now you know why we use German Shepherds as protector dogs. If you are looking to protect your home and family, then contact our protection dog experts at K9 Protector today to book a visit. You will be able to meet our trainers and some of our fantastic, trained dogs that we have currently - and get the opportunity to understand more about how they can benefit you.

We look forward to seeing you soon.