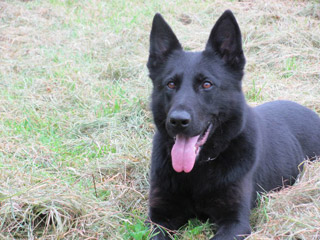 With my husband often being away on business, and a big increase in violent burglaries near where we live, we decided to investigate the idea of having a protection dog. I did a lot of research and found there were a lot of websites that offered “protection” dogs which were either hugely expensive, or people just selling aggressive dogs.

My internet trawl brought me to Al’s site, and having read a previous testimonial, I decided to drop him an email, informing him of my situation, and asking him for some advice. Al called back the same day, and we chatted for half an hour. He took the time to answer my questions, listen to my concerns (i.e. we already had two cats) and talked me through what owning a protection dog would be like.

I immediately felt re-assured that we were going down the right path, and booked an appointment for myself and my husband to meet with Al, and a dog he thought would be suitable for me, called Ishmai. Al introduced us to Ishmai and we all went on a walk so we could see her in her “natural” pet mode - she was delightful – very friendly, with a wagging tail and plenty of licks for us! Later in the afternoon, we then got to see Ishmai in action, and we got see what she could do when there was a threat......she went from lovely dog to formidable dog, but what impressed me most, was how responsive she was to ALL commands, not just to protect you, but quick to listen to you to return to your side - also an important factor!

There was no pressure from Al at all to buy Ishmai that day, but by this point, we decided she would be the right dog for us, and agreed to buy her and pick up the following week. During this time, Al took the time to introduce Ishmai to his own cats to gauge her reaction, which appeared that she had a healthy interest, but not an adverse reaction to them.

I was both nervous and excited about our new addition to the family, and was hesitant as to whether Ishmai would listen to myself or my husband. However, another good factor with Al is that he doesn’t let you go away with your dog until he is confident that she is listening to you both. It could take 2 hours or all day – he will spend the time with you to make sure you are confident. My husband and I spent time with her individually, and then later in the day we worked together with her, and before too long, we were heading home with Ishmai, and her new life with us was to begin.

One of the things I really like about Al is he genuinely cares for the animals he trains – he is not about a quick sale, and takes pride in his work and placing the right dog in the right home. He even had a lump in his throat as we drove off with Ishmai ...

The aftercare from Al has been second to none. Ishmai is our first dog, and I hadn’t appreciated how little I knew. I had grown up with dogs, but this the first one of my own, and I have been overly anxious about doing what’s right for her – never sure whether I’m being too soft, or too harsh – as Al has told me, they are masters of opportunity, and if they can see a way of getting away with anything, they will. To that end, Al has been invaluable, I’ve rung him several times in near panic – she won’t eat etc etc. He has the patience of a saint, and has never made me feel bad for ringing him for advice.

I’m pleased to say that we found our feet, and Ishmai has now settled into our home, and I am much more relaxed with her. We have a lovely life together, lots of walks and cuddles, yet with the knowledge that if the worse was to happen, she would put her life on the line for me. She even gets along with our cats – although that’s mainly because they put her in her place!

All in all, I wouldn’t hesitate to recommend Al and K9 Protector to anyone looking for this service. Our thanks also go to Bob for being the one that Ishmai practiced her skills on – not a job for the faint-hearted!